A week ago, I shot my first deer!  My life has been a bit hectic lately.  But when I had the chance to get out to the San Juan Islands for a late season hunt, I jumped on it.  I headed up on a Saturday to meet them at the marina and they took me over to Decatur Island–a small island in the San Juans not accessible by ferry.  The couple helping me hunt is the same couple that helped me catch my first salmon. 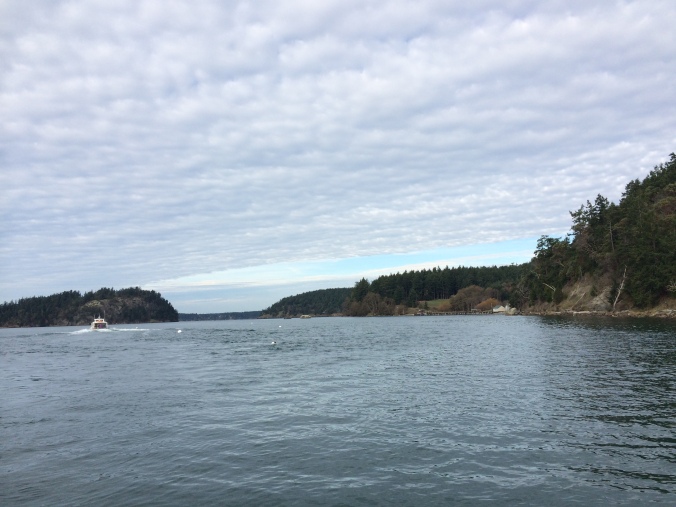 Decatur Island to the right

We ate lunch and made a game plan for the rest of the day.  Kelli and I would head out to an area that they’d seen several deer before.  I changed into my hunting gear and off we went.  We made our way back through trees until it opened up a little bit.  We found a large tree trunk that had a log in front of it that was a good spot to sit and have some cover. 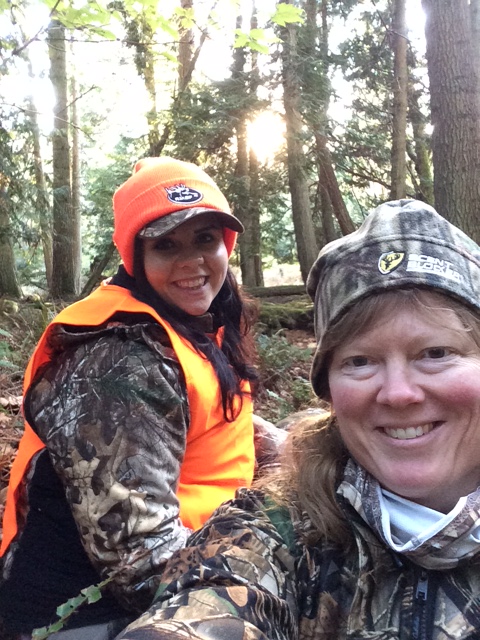 Kelli and I waiting for deer!

One of my goals getting into hunting has been to find other women to hunt with.  It’s a lot easier said than done.  So it was an awesome feeling to be out there with another woman!  We sat quietly and the craziness of everyday life faded away.  One of my favorite things about hunting is feeling connected to the outdoors.

Pretty soon we were surrounded by the sound of birds.  A woodpecker went from tree to tree, pecking the whole way.  Smaller birds moved right in front of us.  We hoped since birds weren’t bothered by us, a deer wouldn’t be either.

The temperature started to drop as the end of hunting time for the day drew near.  It’s hard to sit still in near freezing temperatures.  In all the noises we heard, nothing sounded like a deer.  With a half hour left to hunt, I got up and walked around to see if any deer were bedded down near us.  Nothing.  No movement anywhere.  With daylight going away, we decided to call it a day and make our way out.

It was a lot easier heading in than out.  The windstorm that knocked out my power also hit the island and toppled a lot of trees.  So we had several trees to climb over and under.  All I can say is thank goodness for headlamps!  We finally found our way out and went back to their house.

Her husband, Ed, was recently on a big horn sheep hunt.  For dinner he cooked up some big horn sheep steaks wrapped in bacon.  It was some of the best meat I’ve ever eaten!  We talked about what our plan would be for tomorrow—a bright and early morning to be in place when shooting hours started.

The next morning, we were up before the sun.  This time, Ed joined me to take me a few places that he had seen deer.  We slowly walked to our first spot and again sat in near freezing temperatures.  It surprised me by how quickly time passes when you’re sitting still in silence.  After an hour with no sign of deer, we decided to try another spot he’d seen deer before. 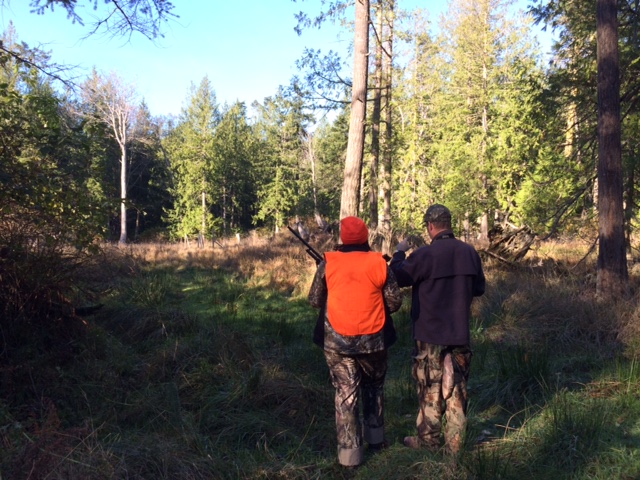 We quietly walked up to a clearing and he spotted a doe bedded down.  We crawled closer, trying not to spook her.  Decatur is an any deer unit so you can shoot bucks or does.  Once we got into place, she had moved.  We slowly crept closer to where we had seen her and out she popped again.  I brought the gun up and looked through the sight—black.  I moved my head until I was able to see through it, she was gone.

It was one of my first lessons I learned that weekend—shooting happens in a matter of seconds.  I didn’t realize how little time you had to line up a shot and shoot.  I was a little bummed I missed a shot, but it was still early and hoped we’d find more deer.

We made our way down into another property that was on a hill.  Part of the hill was open and a thick patch of trees was to our right.  About halfway down, I spotted a buck on the trail below us.  We stopped and moved into the trees since he was headed that way.  It didn’t seem like he noticed us.

Another thing I learned, hunting in Western Washington is a lot different than Eastern Washington.  The hunt I went on last year was out in open farmland.  So to be finding deer in thick brush and trees was completely new to me.

I found a shooting lane between all the trees and hoped that the buck would walk into that clearing.  I almost moved down to a log to use to steady the gun when the buck walked out between the trees.  I set up my shot, he was about 60-70 yards away.  He moved where the front half of his body was exposed but the back half was still behind a tree.

I aimed and fired.  The shot echoed in the air.  He took off running up the hill, then stopped a little.  I tried to set up another shot but he moved behind more trees.  That happened a couple more times before he was gone.  We went down to where he had been standing but didn’t see any blood.  We followed the path he had gone and still found no blood.

Shoot and a miss.

This time I was a bit more bummed.  I actually had a shot and just didn’t make it.  We decided to head back to their house to eat lunch.  With half the day gone, I was wondering if that was my one chance at a deer and I’d missed it.

After trying a couple more areas after lunch, we went back to their house to take a quick nap.  Being up so early, I was pretty exhausted.  I took a thirty minute nap and woke up feeling a little more energized. 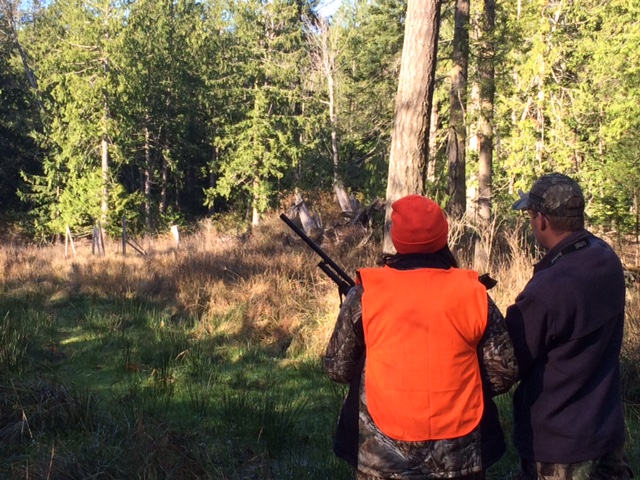 This was it.  The last couple hours of hunting for late season—my last chance to get a deer this year.

We were heading back near where we saw the buck earlier in the day.  We rounded a shop on their property and up popped a doe about 10-15 yards away.  I lined up my shot and pulled the trigger.  Another boom echoed out across the island.

This is when I learned another lesson—once you shoot, keep shooting.  I was too slow to get another shot on her before she moved.  We walked over to where she was standing and found blood, I hit her.

Looking at where the blood was going, she jumped up again and moved farther toward the brush.  Again, it was too quick to get another shot on her.  We decided to go back and get Kelli to help track the blood.  We started following the trail and at an incredibly thick part of the brush, heard her move again.

My dad and brother had always told me, the real work with hunting doesn’t start until after you shoot.  I know knew exactly what they meant.