Driving up to camp, I had no idea what to expect.  They gave us a list of what to pack and a rough outline of the weekend, but nothing about what would happen once we were actually there.  I was greeted by women on the WOW team and directed to park in a field with all the other cars.

As I began gathering my stuff, I noticed a couple girls walking toward camp with only a backpack that had their sleeping bag attached at the bottom.  Now I don’t think that I’m someone who needs a lot of stuff for a weekend, but the list they gave us included a lot of items I wouldn’t normally bring.  I had about three bags for clothes, sleeping stuff, and my day pack with hunting boots in there.

As I was closing my trunk, another girl walked by with several bags and said, “Oh thank god someone else actually brought a lot of stuff with them!”  We walked over to the main barn to pick up our welcome packets.  It was both our first times at the retreat, so it was nice having someone else to be somewhat clueless with.

We picked up our packets and were told to go find a cabin with an open bed.  After talking to the girl more, we realized we went to the same college and both loved Bob Seger which meant we became fast friends, or as we affectionately called each other—buddy.

It was interesting, even though I’m in my late-20s at a camp with women of all ages, it felt like being a kid again going back to camp.  The same thoughts went through your head… will people like me, where will I sleep, I hope there are cool people in my cabin, who will I eat with in the dining hall?

It was nice meeting someone within the first five minutes because a lot of those worries left quickly.  We headed to the cabins to find open beds we’d claim for the weekend.  The first cabin was already full of women so we made our way over to the next.  We found a room with a row of empty beds and decided this would be home for the next couple days.

Our little cabin area, lots of women in one space!

My bed for the weekend, you definitely got to know the person sleeping next to you!

We unpacked some of our stuff as other women continued to join the cabin.  We had a few retreat “veterans” in our cabin, they referred to us as “First Years.”  We had about an hour to kill before everyone was to meet in the barn for the formal welcome, so we decided to explore the camp area. 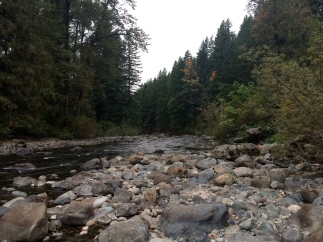 We found the river and stayed down there for awhile.  It was a beautiful area the camp was located in.  Once it was dark, several bats flew overhead.  I continued talking to my camp buddy, Jessica, and we found we had a lot more in common than just outdoors stuff.  It was almost 8pm so we headed up to the main barn.

Being in the barn was my first chance to see how many women were actually at this retreat.  It was a lot of us!  I was also surprised by the span in age, from young to old, women from all corners of the state were here.

The woman who created the retreat back in 1998 spoke to us first.  It was really cool to know that one woman made this weekend happen from an idea she had years ago.  This is the mission of Washington Outdoor Women:

“WOW is a program dedicated to teaching the traditional outdoor skills of fishing, hunting, and shooting. Through these and other wilderness skills, women and girls learn to enjoy and respect the outdoors, thereby becoming responsible stewards of our state’s natural resources.”

She then explained the program is non-profit and without the volunteers and sponsors we wouldn’t be there.  All of the instructors were there on their own time to teach us.  As one said, it means more seeing women excited about learning something new they love than it is to be paid.  It was at this moment I realized I had stumbled upon a pretty special group of women and was beyond excited to get the weekend started. 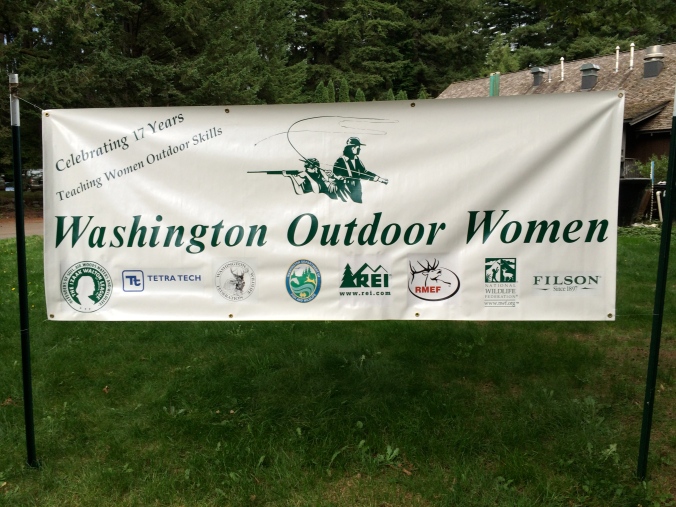 They then thanked the sponsors and workshop donors who made this weekend possible.  I was honestly impressed by the number of sponsors and donors and wanted to list them out here.  I always appreciate a company that goes above and beyond to help women in the world of hunting and fishing.

And yes, those companies and groups gave us a lot of free goodies over the weekend to help us learn even more about the workshops we took.  It was awesome to see.

After the welcome speech and what to expect over the weekend, we were told there’d be an hour for socializing and meeting other women around a campfire.  With our name tags, they gave us all playing cards and told us our goal of the weekend was to find the person with our same card.  It was actually a really cool idea to get all of us out of our shells to talk to each other. 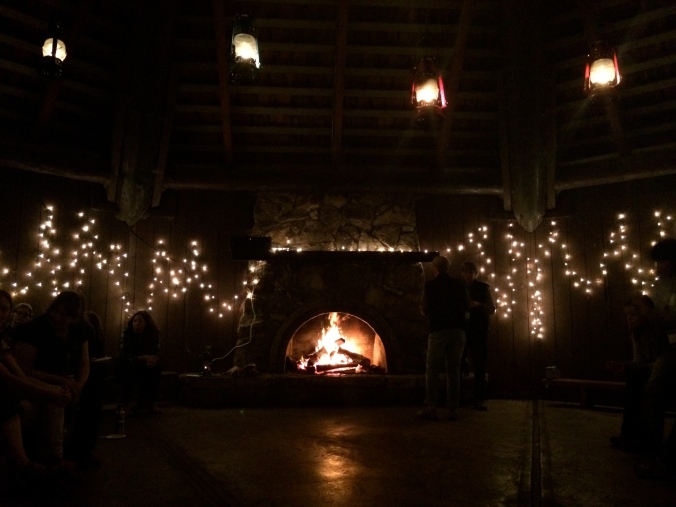 We walked over to the covered area with the fire and ate food as we met other women.  I found my card twin and we both talked about how we ended up there.  It was interesting how most of the women I met said how hard it was for them to find women who enjoy doing outdoors things like hunting and fishing.  It made me realize I’m not the only one in that boat!

Okay, now I know that the Pacific Northwest is known for our flannel wearing.  But I just have to say even I found it humorous how at least half of the 125 women there were in flannel shirts.  I’m guilty of it too!  We all looked like we planned it though.  While people wore flannel all the days there, it seemed everyone decided the first night was the time to wear it.

After meeting a few more women, we headed back to the cabin to get ready for bed.  I found a couple women in my cabin who had all the same workshops as me.  Breakfast was at 7am so we tried to sleep as much as possible for the long day ahead.